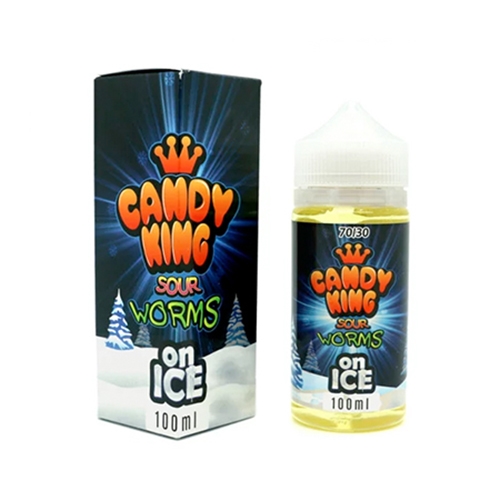 If you’ve vaped Candy King’s Sour Worms and enjoyed it, you will love Candy King On Ice Sour Worms. It has the same flavor profile as the original Sour Worms, but with an icy twist.

This gummy worms e-juice will give you the same candy flavor that you cherished as a child. It is a real delight to vape. Sour Worms is one of the best fruity candy e-juice flavors on the market.

Sour Worms is one of the first five e-liquids released in the Candy King line. There are two versions of each Candy King e-juice. You have the original version and On Ice versions. The vape juices in this line include; Batch and Batch On Ice, Belts, and Belts On Ice, Strawberry Watermelon Bubblegum and Strawberry Watermelon Bubblegum On Ice, Swedish and Swedish On Ice, as well as Sour Worms and Sour Worms On Ice.

Each of these flavors is unique and provides a distinct vaping experience. Sour Worms On Ice contains a touch of menthol in addition to the delicious flavors of gummy worms

Candy King On Ice Sour Worms is a very refreshing e-liquid to vape. You get the delicious taste of gummy worms you relish, but with a hint of koolada. A blast of menthol flavor will invade your senses when you are vaping Sour Worms. The flavor of gummy worms is sweet and sour. However, you get more of the sweetness than the sour notes. On the inhale, you’ll be treated to a blast of sweet, fruity flavors that ends with a nice cooling sensation at the back of the throat. On the exhale, you really get the icy menthol flavor which gives you a refreshing sensation. You may or not taste the sour notes in this e-juice depending on the type of device you’re using.

Worms is available with a vegetable glycerin (VG) and propylene glycol (PG) ratio of 80/20. This is MAX VG e-liquid, but the e-juice does not seem to be very thick. Instead, it seems to be quite light. You can use any device to vape this e-juice. However, dripping this e-juice with an RDA at a low wattage is the best in my opinion.

Personally, I find that you get the best combination of flavor and vapor production at low wattage, but that is a matter of personal opinion. Steeping this e-juice will improve the taste because it allows the flavors to blend.

The nicotine strength levels available for Candy King On Ice Sour Worms are 0 mg, 3 mg, and 6 mg. The throat hit that you will get from this e-juice is very mild. There is a mellow sensation at the back of the throat.

If you want to get a strong throat hit, you can purchase additional nicotine shot. You will notice that with the menthol flavor, the throat hit seems to be sharper, but is mellow.

The box and the bottle of Sour Worms have the emblematic Candy King logo. It comes in a 100-ml chubby gorilla unicorn plastic bottle that has a childproof cap. You need to use a bit of an effort to open. You will find a lot of information about the e-liquid on the label and box of this e-juice.

You can get a 100ml bottle of Sour Worms On Ice at the Ejuice Deals online store for only $11.99.

Ejuice Deals has a vast array of products from all the top brands in the industry. What’s more, the store offers bargain prices. Visit ejuice.deals and check them out now.

Lucy Jan 13, 2021 0
We love CBDfx gummies! Who doesn’t? if you do not, it’s probably because you haven’t had any experience with these…
Starter Kits